News / The Retail Store Is The New E-Commerce Website 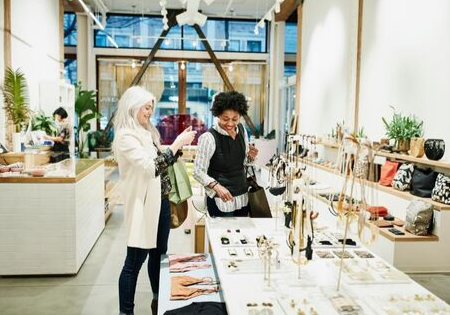 ‘Commerce Everywhere’ Is The Future

The way in which consumers shop is being revolutionized thanks to technology. Amazon’s Dash Button is an example of shopping coming to your kitchens. It is a great precursor of a future where shopping can be done outside of traditional interfaces. In fact, who needs a button when an entire wall can be made into one? Interactive surfaces in public spaces are becoming more common in South East Asia. You can touch a wall to get a coupon or even start a purchase.

And Goldman Sachs estimates AR/VR spend by retailers will hit $1.6 billion in 2025. So for all the buzz about AR/VR being used in conference rooms, it isn’t too far-fetched to believe you could see this technology deployed in your neighborhood convenience store within the next six years.

Digitally native vertical brands succeed because they are authentic in their messaging and product design and product values. They could disseminate that message online easily. But growth happens only when you go where the shopper is.

Pop-up shops and showrooms are how DNVBs are keeping up the growth. Smaller stores designed for best product experiences mean that they can keep the cost low while taking the brand to the shopper. This trend should also fuel the adoption of AR/VR, as these kinds of technologies deliver a more memorable brand experience.

Would we see more drones in a store than bots? I don’t know, but I did see some interesting robots in action at NRF 19. Restocking aisles and alerting employees about an area in need of cleaning are great reasons to have drones or robots inside a store. My money, though, is on drones. They are less intrusive than robots and do not come in the way of humans. The other interesting tech that I saw was conveyor belts attached to the roof that deliver in-store pickups. China’s biggest online retailer is already using these technologies, and I hope we see the United States follow suit soon.

IoT sensors and tracking are so mainstream that you can get them on a subscription model now. Tracking shopper touches of products/aisles and the time they spend in specific sections can all be tracked down to square inches. Such technologies always existed, but now they are affordable, reliable and the data from them can be crunched at scale quickly.

Computer Vision Inside The Store

While heat maps and their value are easy to demonstrate, the real value for a store lies in dramatically improving the employee throughput across functions like product scanning, price lookups and stock-out discovery. Services like Amazon Go are proof that automated stores can exist. Computer vision is increasingly finding applications beyond the e-commerce storefront or the aisles and is moving into operational functions, making it more efficient and cost-effective to run such stores.

Being Viable By Going Small

Talking about store viability, there were some interesting cases made for store formats that are bigger than a vending machine but smaller than a convenience store, which could be cashierless and fully automated. It’s another case of being nearly ubiquitous and yet being financially viable. Think of this format as a permanent pop-up, if you will.

To sum up, the store becomes a key part of omnichannel shopping and fulfillment experience for the shoppers. Retailers and even modern, digitally native brands are recognizing this. Investments are going into in-store experience and analytics. Top retailers are betting on technologies like computer vision and drone/robots to keep the costs low at the stores.

Physical stores are not going away. In fact, according to a 2017 report from HeadCount, “Even a typical brick-and-mortar apparel retailer can out-convert Amazon.” They are becoming just like a website where every pixel is tracked, measured and perfected for a click.