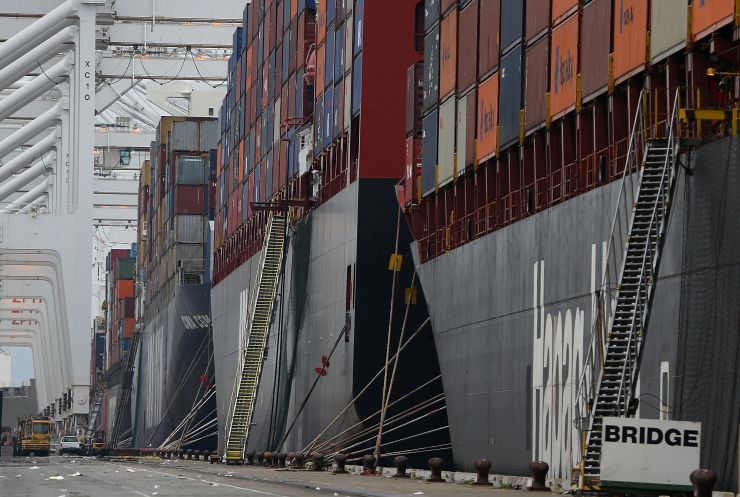 After nine months of negotiations, a tentative labor deal was reached on Friday, settling a dispute that disrupted the flow of cargo through 29 U.S. West Coast ports and snarled trans-Pacific maritime trade with Asia.

The settlement, confirmed in a joint statement by the two sides, was reached three days after U.S. Labor Secretary Thomas Perez arrived in San Francisco on Tuesday to broker a deal with the help of a federal mediator who had joined in the talks six weeks earlier.

The White House called the deal “a huge relief” for the economy, businesses and workers.

President Barack Obama urged the parties “to work together to clear out the backlogs and congestion in the West Coast ports as they finalize their agreement,” the White House said in a statement.

The 20,000 dockworkers covered by the tentative five-year labor accord have been without a contract since July.

Tensions arising from the talks have played out since last fall in chronic cargo backups that have increasingly slowed freight traffic at the ports, which handle nearly half of all U.S. maritime trade and more than 70 percent of the nation’s imports from Asia.

More recently, the shipping companies have sharply curtailed operations at the marine terminals, suspending loading and unloading of cargo vessels for night shifts, holidays and weekends at the five busiest ports.

Perez said that as part of Friday’s accord, the International Longshore and Warehouse Union and the shippers’ bargaining agent, the Pacific Maritime Association, agreed to fully restore all port operations starting Saturday evening.

Perez was sent to California on Tuesday as an emissary for Obama, who had come under mounting political pressure to intervene in a conflict that by some estimates could have ended up costing the U.S. economy billions of dollars.

Perez said he told the union and management negotiators: “You have an obligation to resolve this matter quickly because too many people and businesses are suffering.”

In a conference call with reporters following the agreement, Perez said he also had put leaders from both sides on notice that unless they came to terms swiftly they would be “summoned to Washington to continue their negotiations at the White House.”

The principal sticking point when he first joined the talks, Perez said, was the arbitration system for resolving workplace disputes under the contract. He did not disclose how that impasse was overcome but said the parties agreed to changes that would improve the system while “ensuring fairness to both sides.

Perez, who had been joined at times this week by U.S. Commerce Secretary Penny Pritzker and Los Angeles Mayor Eric Garcetti, exited the talks Friday morning after meeting one last time with both sides.

Announcement of an agreement came hours later. The deal is subject to ratification by the union rank-and-file and the individual shipping lines and terminal operators that make up the PMA. No details of the terms were immediately revealed.

Disruptions at the ports, blamed by each side on the other as pressure tactics, have reverberated throughout the U.S. economy, extending to agriculture, manufacturing, retail and transportation.

Cargo loads that would normally take a few days to clear the ports have faced lag times of two weeks or more as dozens of inbound freighters stacked up at anchor along the coast, waiting for berths to open.

California farmers were especially hard hit, with port disruptions posing a major barrier to perishable goods headed to overseas markets and export losses estimated to be running at hundreds of millions of dollars a week.

One automaker, Japan’s Honda Motor Co., said on Sunday it would slow production for a week at three North American plants due to delays in parts shipments from Asia. Other car manufacturers said they were switching to higher-cost air freight to minimize delivery slowdowns.

A longer-term concern has been that U.S. export business lost to other countries and ports may not return once the West Coast dock worker crisis ends.

Port officials have said it would take six to eight weeks to clear the immediate backlog of cargo containers piled up on the docks and several months for freight traffic to return to a normal rhythm once the dispute was settled.

Besides work slowdowns the companies accused the union of staging to gain bargaining leverage, and the curtailed operations the union said were designed to squeeze its members, the West Coast waterfront still faces a range of systemic problems cited by port authorities as factors in the backups.

One of those is the recent advent of super-sized freighters that have been inundating the ports with higher volumes of cargo all at once, as well as railway delays and a shortage of truckers serving some of the harbors.

Still, the settlement averted a worst-case scenario of the labor dispute devolving into a full-scale, extended shutdown of the ports, which the retail and manufacturing industries have projected could cost the U.S. economy some $2 billion a day.

The last time contract talks led to a complete closure of the West Coast ports was in 2002, when the companies imposed a lockout that was lifted 10 days later under a court order sought by President George W. Bush.

The shipping industry has estimated the 2002 lockout caused $15.6 billion in economic losses.