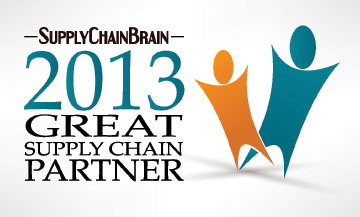 INDIANAPOLIS –MD Logistics is among the 100 Great Supply Chain Partners for 2013, as named by SupplyChainBrain. The award, in its 11th year, recognizes services providers whose solutions have had a significant effect on a customer’s efficiency, customer service and overall supply chain performance.

MD Logistics was selected after a six-month nomination period from more than 2,500 companies.

“This honor is special because it reflects the perspective of the customers,” says Mark Sell, president and co-founder of MD Logistics. “This demonstrates that our customers see the value in our services: customized solutions with the benefits of a global supply chain.”

As one of the fastest-growing 3PL (third-party logistics) providers in the Midwest, MD Logistics continually expanding its pharmaceutical and life sciences division and its retail and consumer services based on customer needs. In recent years, the company opened a facility in Reno, Nev., to better serve the West Coast and activated a pharmaceutical foreign trade zone in its Plainfield, Ind., location.

The award is a first for MD Logistics, which prides itself on providing clients with the resources of an integrated global supply chain and the benefits of a mid-size company: customized turnkey solutions and rapid logistical services.

The methodology for the Great Supply Chain Partners is as follows taken directly from the Supply Chain Brain website.

The list of partners following this report is based solely on entries voluntarily submitted to SupplyChainBrain.com, where the official nomination form has been posted since early this year. Over the last few months, many readers received emails asking them to participate and directing them to the form. Other readers and users of the website independently found a link to the official nomination form on the home page.

Nominations could only be made using the official web-enabled form that required nominators to identify themselves, their position, their company, their email address and a phone number where they could be reached to verify their responses. For their nomination to be counted, the participants had to provide adequate identifying information to verify their identity and their legitimate role in the industry. Nominations from participants selecting their own companies or closely allied entities were disqualified, as were multiple nominations from the same customer company.

Participants could nominate up to three companies and could support their nomination with as much or as little commentary as they wished. To provide more in-depth information for this report, some nominators were interviewed after they submitted their completed forms. We received thousands of qualified responses nominating over several hundred companies. The final list presented here includes the 100 companies that received the most nominations. In the case of ties, the nominations with the most detailed justification were selected.

SupplyChainBrain, the world’s most comprehensive supply chain management information resource, is accessed year round through a wide range of ever evolving multi-media formats by hundreds of thousands of senior level industry executives. In addition to addressing the fundamental principles of supply-chain management, SupplyChainBrain identifies emerging trends, technologies and best practices, forward thinking ideas and cutting-edge solutions ~ and continues to write and report about these as they evolve and mature.  To learn more visit www.supplychainbrain.com.